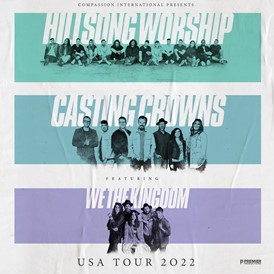 NASHVILLE, Tenn. (February 11, 2022) – Premier Productions and Compassion International announce the worship event of the spring as Casting Crowns, Hillsong Worship and We The Kingdom all share the stage for a powerful worship experience that will inspire and encourage all who attend.

Casting Crowns will be fresh off their The Healer Tour, ready to perform some of their biggest hits, including new songs,“Scars in Heaven” and “The Power of the Cross.” Hillsong Worship joins the tour after the success of their latest album “These Same Skies” with hits like, “That’s the Power” and “Resurrender.” The tour also features the 2021 Dove Awards “Contemporary Christian Artist of the Year” We The Kingdom.

“We are so excited to be heading out with Hillsong again,” said Casting Crowns’ lead vocalist Mark Hall. “Our prayer is that God would use this tour to unite us all and point us to the Healer!”

Audiences can sign up for the exclusive pre-sale now at PlatformTickets.com. Tickets go on sale to the public on Friday, February 18th at 10:00 a.m. local time.

“For this tour we’re believing that God will be magnified, people will be set free, supernatural healing will be experienced, lives will be changed, what’s broken will be restored, God will be encountered and the name of Jesus will be lifted by thousands of people in one room,” said Hillsong Worship. “We’ve seen God do this before, and we can’t wait to see Him do it again.”

The 18-city arena tour will kick-off on April 22 in Tupelo, Miss., and will stop in Birmingham, Ala., Oklahoma City, Okla., Louisville, Ky., Albany, N.Y. and Raleigh, N.C. before the final show on May 18 in Greenville, S.C. For a full list of dates and cities, see below.

“We could not be more thrilled and honored to join Hillsong Worship and Casting Crowns on tour,” said We The Kingdom. “We’ve always admired how both artists have served the Kingdom of God through their music, and we can’t wait to be on the road with them!”

Casting Crowns is a contemporary Christian and Christian rock band started in 1999 by youth pastor Mark Hall, who serves as the band's lead vocalist, as part of a youth group at First Baptist Church in Downtown Daytona Beach, Florida. They later moved to Stockbridge, Georgia, and more members joined. Some members of the band currently work as ministers for Eagle's Landing First Baptist Church in McDonough, Georgia. The band has won a Grammy and a Dove Award.

Hillsong Worship (formerly Hillsong Live) is an Australian praise and worship group from Sydney, Australia, where they started making music in 1983 at Hillsong Church. Fifteen of their songs have appeared on the Billboard magazine charts in the US, with "What a Beautiful Name" (2016) representing their greatest success, reaching platinum in the US. The band has some notable members, including Darlene Zschech, Brooke Ligertwood, Reuben Morgan, and Joel Houston.

About We The Kingdom:

We The Kingdom is a multigenerational family of musicians including producers and songwriters Ed Cash (Working with artists like Chris Tomlin, NeedToBreathe, Bethel Music), Scott Cash, Franni Rae Cash, Martin Cash and Andrew Bergthold. The members of We The Kingdom have been involved behind the scenes in songs that have been sung around the world and now are ready to tell their own story firsthand. Their sound is a blend of worship, vulnerability and grit that is birthed out of decades of musical influences and a shared difficult experience that brought them together as a band. Their debut EP came out in the fall of 2019.

Founded in 1996, Premier Productions has sold over 20 million tickets to patrons. Premier has been a Top 20 global promoter and has produced more than 2,000 concerts and events in the past five years. Pollstar named Premier the #1 faith and family independent promoter in the last 10 years. Producing events that move the soul both nationally and internationally, Premier is proud to have helped raise more than $271 million to improve the lives of children and communities in 100+ countries worldwide. Whether it’s a large multi-day festival, sold-out concert or intimate conference, Premier seeks to positively impact the lives of every attendee so they leave encouraged, happy and hopeful. Premier is currently promoting acts including Hillsong UNITED, Dude Perfect, Lauren Daigle, Hillsong Worship, Baby Shark, Casting Crowns, Chris Tomlin, Sadie Robertson, Elevation Worship, Kari Jobe Bethel Music  and many more.

Back to the Press Room

Got your ticket?
Now find your seat.

What to do while at the BJCC